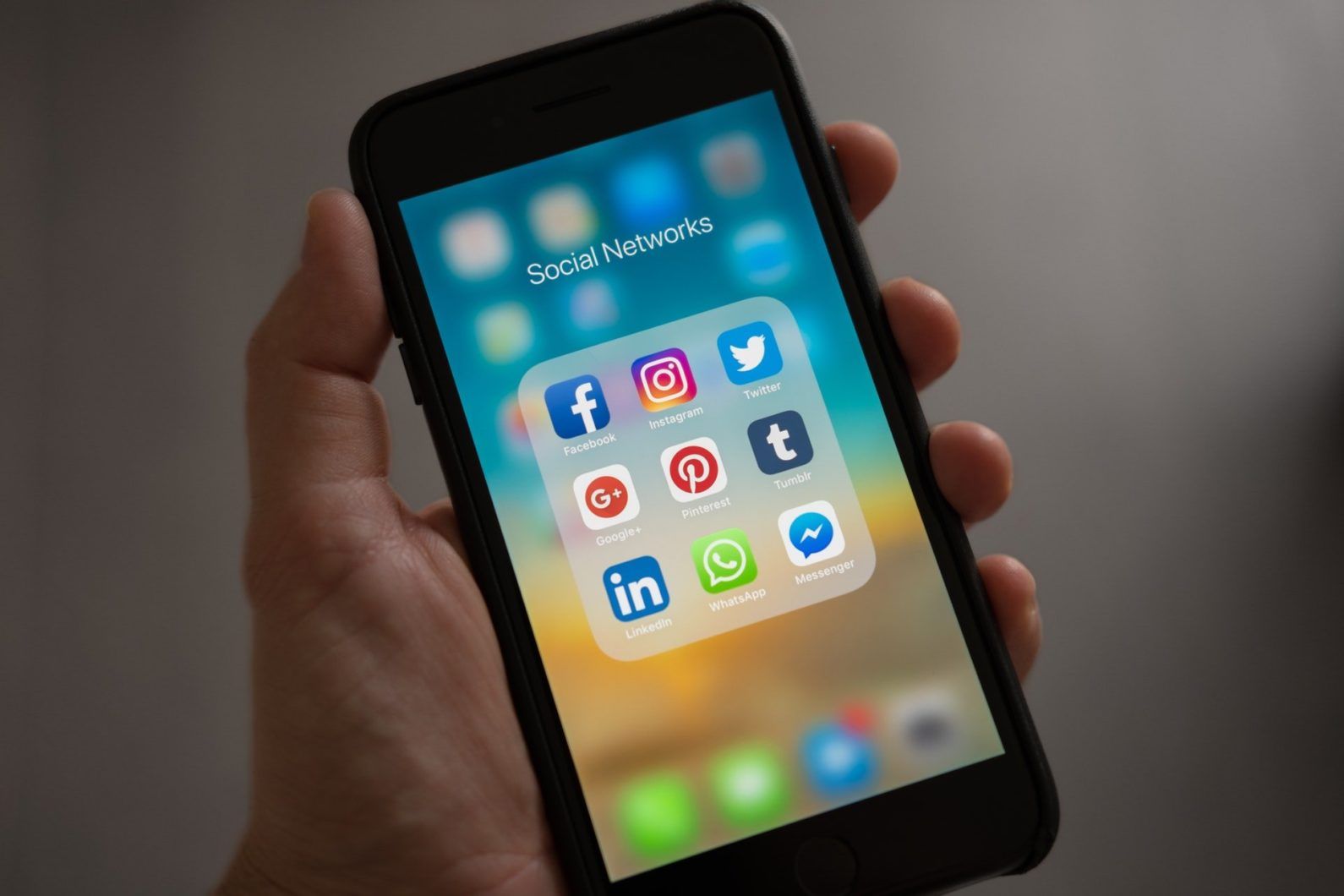 By Tobias Dziuba22. February 2018No Comments

Facebook Mobile App Install Ads are ads in the advertising system of Facebook and have the purpose to achieve downloads of a mobile app. They are usually characterized by the call-to-action “download” and are displayed exclusively on mobile devices (smartphone & tablet).

The campaign goal can be selected as usual in the Ad Manager under Consideration → App Installations.

One important distinction we need to make for the further process is the distinction between Mobile App Install Campaigns and Mobile App Engagement Campaigns. For Mobile App Install Campaigns, the goal is to convince a new customer to download the app and possibly perform a desired action (so-called events). Of course, it also happens that you want to lead existing app users to perform a certain activity in the app (purchase, registration, etc.).

What requirements must be fulfilled to run Mobile App Install Campaigns?

To advertise your mobile app (IOS & Android) through the Facebook promotion ecosystem, it is required that the Facebook SDK is implemented in the app.

In addition to the implementation of the Facebook SDK, it is generally recommended to make use of the standard events for app tracking.

The following standard events are available:

The existing standard events are designed especially for e-commerce and gaming apps, but Facebook prevents no one from using the default events for other apps.

When you create a Mobile App Install Campaign, the app to promote is defined at the ad group level. Here it is also determined for which event the campaign should be optimized.

It is possible to optimize for the following events:

As a general recommendation, it is recommended to optimize for app installs, at least until 50 app installations per ad group have been reached.

Since usually both, an IOS and Android App, should be marketed, a separate ad group must be created for each operating system.

For this reason, a mobile app campaign looks like this: 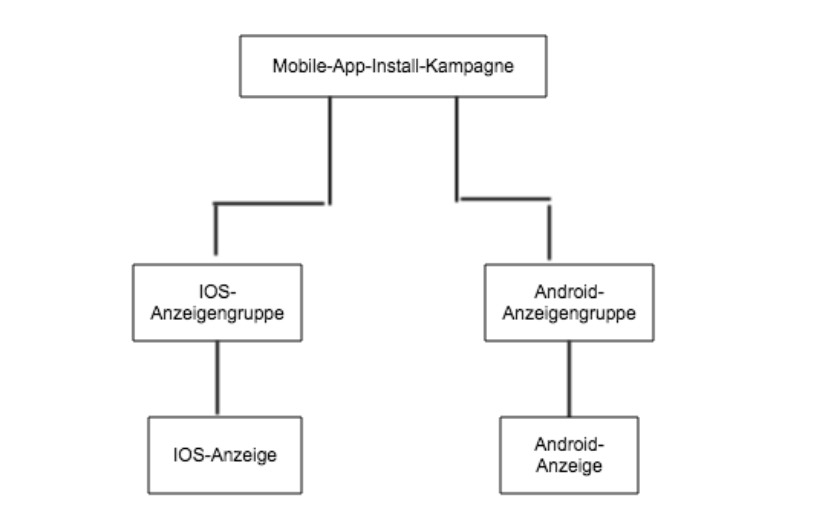 Probably the most important criterion to be successful with a Mobile App Install Campaign is choosing the right target audience. Because only when the app is displayed to the right people, performance KPIs, such as cost-per-install, will sustainably decrease.

In the following, I would like to present my preferred target audience choices:

1. Target audience: Retargeting campaigns based on website visitors:
If you run a website that already has enough monthly visitors (+ 1000 / month), then you can create a website custom audience based on the Facebook pixel, which can be displayed with retargeting campaigns for Mobile App Install Ads afterwards. This type of campaign, in my experience, is a very effective way to generate the first downloads.

2. Target audience: Lookalike audience based on website visitors:
Once a website custom audience has been created, it makes sense to create a lookalike audience from that source audience. This audience is especially recommended for the scaling of app downloads.

3. Target audience: Retargeting campaign based on email newsletter subscribers
You have an email list of people who might like the app? Then it’s a good idea to create a custom audience and address those people using Mobile App Install Ads.

5. Target audience: Lookalike on app installs or other app events
By implementing the Facebook SDK, app activities such as downloads and registrations can be tracked. This also makes it possible to create a custom audience of the users who performed the respective activities. Since these users already use the app, a retargeting campaign is not very helpful. However, we can use this custom audience to create a lookalike audience (LA app install or LA app reg). 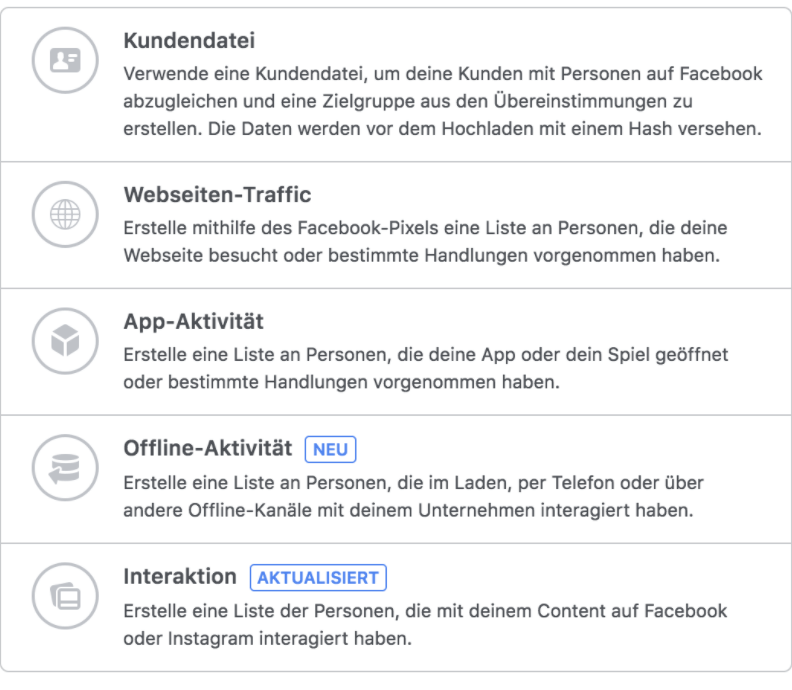 3. Step: Now we select “most active users” in the drop-down menu and we can now select the respective percentile and the period of user consideration. 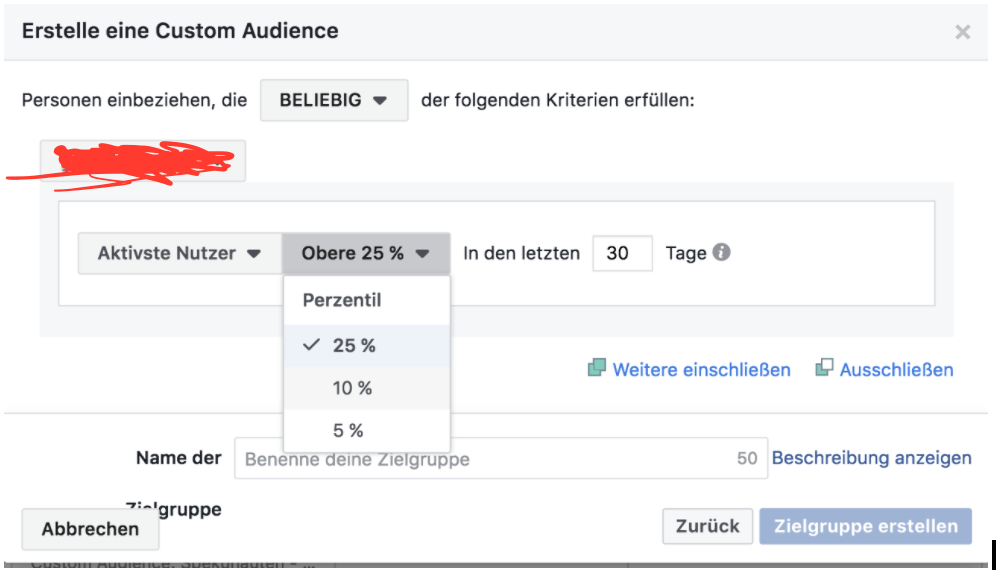 And like this, we’ve already created a custom audience of the most active app users. Now only a fitting lookalike audience has to be created.

Selection of the right ad placement in the Facebook ecosystem 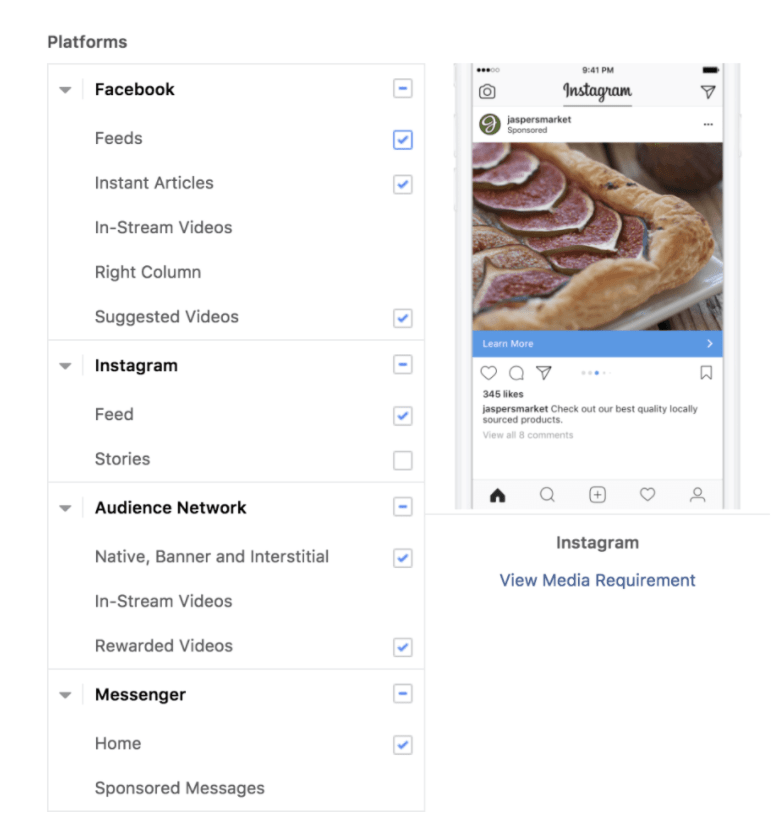 As usual, you also have the choice between “automatic placement” and “edit placement”. The segmentation by placement is certainly one of the most important and should therefore be monitored in the campaign evaluation analysis.

Of course, besides the target audience selection, the design of the ad also plays an important role regarding the success of an app campaign. For app campaigns, the procedure is identical to designing other campaigns (link clicks, conversion, etc.).

On the ad level, you can choose between an image/video and multiple images/videos. The components of a Mobile App Install Ad are the image/video, the text & title and also the call-to-action button, which is specifically designed for app ads. 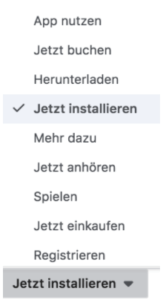 The only difference in the design of Mobile App Install Ads is that the news feed link description is missing. Apart from this, all conventional components can be used for designing the app.

Running Mobile App Install Ads is not very different to other campaign formats. The biggest difference is that the Facebook SDK needs to be implemented. Furthermore, it can only be said that all assumptions (target audience, placement, creatives) have to be tested in order to find the perfect combination.